Home » Sala stampa » Interventi » Address by the President of the Italian Senate, Sen. Marcello Pera to the Nato Parliamentary Assembly 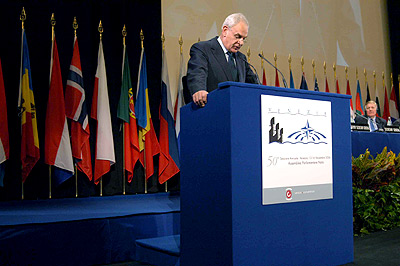 Address by the President of the Italian Senate, Sen. Marcello Pera to the Nato Parliamentary Assembly
50th Annual Session – Venice

Distinguished delegates,
I bring the greetings of the Italian Senate to the parliamentary delegations of NATO member countries, associated and observer countries, to the President of the NATO Parliamentary Assembly Hon. Doug Bereuter, to the Supreme Allied Commander General James Jones, and to the Deputy Secretary General Ambassador Minuto Rizzo.
NATO is the most important international security and defence organization. It secured peace against the threat of communism and played a key role in the fall of the Soviet Union and the Warsaw Pact. Despite the dramatic change in historical circumstances, its relevance is far from diminished: new threats are hovering over the West and new security needs are emerging.

NATO is tackling these challenges and, in Europe, it is making a major contribution to the stabilization of the Balkans. However, a strategy restricted to the European continent is no longer either a sufficient or far-sighted response, because the very borders of European and Western security have moved further away. In Afghanistan NATO has played a key role. The fact that a regime with callous disregard for human dignity fell in Kabul and that free elections have been held there is due in no small part to the action of NATO.
The security problem in Iraq is no less challenging than that in Afghanistan. Iraq too is seeking to free itself of the sad legacy of a dictatorship. That country is also heading towards free elections. Stability in Iraq is also a crucial factor of security for the West. The North Atlantic Alliance has given an initial response to the desire for freedom of that people. This is a step forward that should be followed by others, with more ambitious objectives than the training of Iraqi armed forces. The NATO Secretary-General said he would not rule out the possibility that this may happen soon. Why, then, the continuing problems and uncertainty?
The answer lies in Euro-Atlantic relations. Today, Europe and America are divided. Secretary-General De Hoop Scheffer said there is a perception gap between the US and Europe with respect to the terrorist threat. Many Europeans find it hard to believe that an incident in a far-away Asian region may put their personal safety or national security in jeopardy. I believe the Secretary-General is right, and I agree with him when he says that this is a very short-sighted view.
Europe feels the terrorist threat with less urgency. It sees terrorism as a form of reaction, not of aggression. It believes that this terrorism is isolated and is not here to stay; that it has been caused to a great degree by the West, especially Israel.
These divergences emerged above all after September 11th and with the war in Iraq. I believe, however, that they are only the symptom, not the root of the crisis. The origin runs deeper, and can be summed up in a few words: part of Europe feels that it no longer belongs to the same community as America because it has its own special nature, and consequently different interests from those of Americans.
I believe this is a mistake, and a great risk. Can Europe do without the United States? Can Europe be secure without the United States? I may reverse the order of words, but my answers would remain the same: I do not think so. I therefore believe that we must act quickly to restore the significance of an alliance that extends far beyond its military dimension, given its political nature and the intensity of the values shared by its members.
I do not deny the existence of differences between Europe and America in lifestyles, economies, the role of government, welfare systems, research and many other areas. Nor do I deny that these differences are indeed useful. But I do reject the contention that they are deeper than they have ever been, and above all I reject the view that they justify divisions or rifts. Therefore, bearing in mind the new threats that the West must confront, I argue that a strategic split would not make any sense.
If misunderstandings and divisions exist, we must overcome them. And this is especially important within NATO, which is the main military, but also political, alliance between Europe and the United States. And this Assembly bears evidence of this. The parliaments you represent do not address questions of security alone, and even when you discuss security you deal with principles and values. Because the principles of liberty, coexistence and security are shared on both sides of the Atlantic, we have a duty to affirm these values and, when they are put at risk, to defend them.
In a world of failed states, terrorism and weapons of mass destruction, we do not have many options. In fact, we have only two: prevention and defence. If we do not use them, we will put the world in harm’s way. Thanks to NATO, no harm was ever done in the past. We must work to ensure this will also be the case in the future.

Home » Sala stampa » Interventi » Address by the President of the Italian Senate, Sen. Marcello Pera to the Nato Parliamentary Assembly