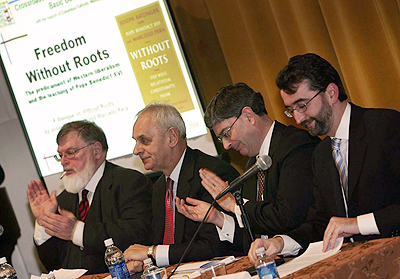 The book we are discussing today – Without Roots – deals with the West and Europe from several standpoints, philosophical, political, historical, religious. It maintains one main view, that the West, and Europe in particular, is passing through a serious state of crisis, both moral and spiritual.

This view is certainly not original, because it has been upheld by many scholars in the recent past, and it is much debated today in the press, in cultural and academic circles, as well as political thinkers and leaders on both shores of the Atlantic. However, to the best of my knowledge, this view has never been argued in such alarming terms as those used by Pope Benedict XVI. To give you an idea, this is what he writes:
«The victory of the post-European techno-secular world and the universalization of its lifestyle and thinking have spread the idea that Europe’s value system, culture, and faith – in other words the very foundations of its identity – have reached the end of the road, and have indeed already departed from the scene» (66)
Again:
«There is a clear comparison between today’s situation and the decline of the Roman Empire. In its final days, Rome still functioned as a great historical framework, but in practice it was already subsisting on models that were destined to fail. Its vital energy had been depleted» (66-67).
Yet again:
«[There is] a peculiar Western self-hatred that is nothing short of pathological … All that [the] West sees in its own history is the despicable and the destructive; it is no longer able to perceive what is great and pure» (78-79).
I agree with this view, and would like to present and discuss it. In particular, I will raise three questions.
1. What are the symptoms of this crisis?
2. Why is this crisis stronger in Europe than America?
3. What remedies, if any, can we make use of to overcome this crisis? Since the Pope’s view is so authoritative, I will endeavor to answer these questions using his words and then add my own just to support and complete what he says.

2. The symptoms of the crisis

This brings me to the second question I raised. Does the crisis of identity affect only Europe or the whole of the West?
The difference between Europe and America cannot be denied. The split is not between Europe-Venus and America-Mars, according to the well-known thesis put forward by Robert Kagan, because these two roles can be exchanged and played alternately. The difference is not even that Europe wants to be multi-polar while America, being a superpower, tends to be uni-polar, because these roles, too, can change according to circumstances.
In my view, the true difference – indeed a deep fracture – is that Europe, unlike America, believes today that a Venus-like world is a state of nature or a natural right, which therefore should never be violated by any unilateral act, no matter what the consequences are. Accordingly, for Europe, multi-polarism is the only way of living in a Venus-like world. It is not without reason that, in Europe’s view, the United Nations is the best institution for dealing with international affairs, no matter how frozen or blocked it is.
The main reason for this difference is, in my opinion, that America is not going through the same crisis of identity as Europe. I do not know whether Chesterton’s famous definition of America still holds today – “a nation with the soul of a church”. I know, however, that no Tocqueville would find in today’s Europe anything akin to what he found in America.
In the United States, the Declaration of Independence, the Bill of Rights and the Constitution have a religious foundation, and religion still plays an important role within society. In Europe, after the Enlightenment and the French Revolution, this has no longer been the case. Not only have European states become secularized, European society has become de-Christianized. As the Pope writes,
«Europe, unlike America, is on a collision course with its own history. Often it voices an almost visceral denial of any possible public dimension for Christian values» (109).
It follows that, whereas in Europe religion is confined to the private sphere and excluded from public life, in America, as the Pope writes, “the private sphere has an absolutely public character. This is why what does not pertain to the state is not excluded in any way, style or form, from the public dimension of social life” (111).
This has devastating effects on Europe. In the absence of any deep belief, strong faith, spiritual bond, what can we hang on to and how can we justify all those noble values – freedom, democracy, tolerance, respect, fraternity, etc. – which are nevertheless professed by Europeans? If the God of the Judeo-Christian tradition is dead and we want to live as though God did not exist, how can we believe in, and devote our destiny to, anything deserving commitment and sacrifice? How can we hope to find an identity, and respect and defend it?
This brings me to my third and final question. What remedies can we use to break free of the crisis of Europe?

The Pope mentions the role of “creative minorities” and affirms that “Christian believers should look upon themselves as just such a creative minority” (80). In my contribution to the book I suggest that they should develop a non-confessional Christian civil religion. “Civil” because it should be incorporated in our behavior as social custom. “Christian” because the Judeo-Christian tradition is an undeniable historical fact of Europe. And “non-confessional” because it should unite both believers and non-believers.
The Pope does not reject this thesis, although he makes two conditions: first, that believers and non-believers should be willing to engage in effective dialogue, without any barriers; second, that non-believers should not exclude that the reason they refer to should be open to the religious dimension.
Personally, I think that both points can be accepted. More exactly, I believe that common ground already exists on which it is possible to begin work. This consists of fundamental human rights. The problem raised is: if, as our European constitutions establish, these rights are not created by the state, where do they come from?
The Pope’s answer to this question can only be as follows: “The existence of values that cannot be modified by anyone is the true guarantee of our freedom and of human greatness; in this, the Christian faith sees the mystery of the Creator and the condition of man, who was made in God’s image” (75).
The answer of non-believers cannot refer to Christian revelation. However, if they are willing a) to use the force of reason as their sole basis and b) ensure that these rights are guaranteed to anyone, then it is the non-believers’ duty to develop a rational theory of fundamental rights, that is, a universal anthropology or ethics in which these rights are considered the imprint of every man insofar as he is a man.
From a negative standpoint, this means rejecting many views current today in Europe and also in the United States: ethnocentrism, according to which fundamental rights are an asset pertaining to westerners alone; relativism, according to which they have no rational foundation; conventionalism, according to which they are stipulations that have been agreed upon and embodied in our laws through a political decision; and historicism, according to which they are mere accidental facts due to the development of our material conditions.
On the positive side, the search for rational justifications of fundamental human rights means committing oneself to a research program in which all can and must take part.And in the meantime? In the meantime, I would suggest accepting the exhortation the Pope addressed to non-believers: follow Pascal’s and Kant’s old invitation to live “as though God existed” (velut si Deus daretur). In my view, this is a wise solution as it makes us all morally more responsible. If God did exist, there would be moral limits to my actions, behavior, decisions, projects, laws, and so on.
I will conclude by saying that what the Pope writes in this book can be beneficial to Europe, call America’s attention to the values of its origins, contribute to bridge the gap between the two shores of the Atlantic, possibly unite the West and make the world a better place.
The West does not necessarily have to set itself against other areas of the planet. But if the West loses its identity, it cannot even engage in that dialogue with the other areas of the planet to which it says is committed. For my part, I consider this to be a cultural and political program worthy of being pursued by those creative minorities who are worried about how things are going in Europe, America and elsewhere.
I understand this program is hard and requires real effort, but how can creative minorities, including an Italian senator, hope for a easy life?